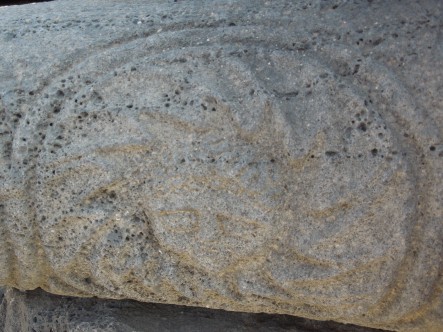 Medusa stone in a synagogue in ancient Korazim, Israel

I can’t say I’ve ever heard preached from a pulpit the following Bible story found in Judges 17 and 18. And I certainly never heard it told in Sunday school! In brief, a lady curses when her money comes up missing. When her son Micah admits that he took it, she responds, “Blessed be you by the Lord”! Okay, so it’s not uncommon to curse when you’re disappointed, but to bless your son in God’s name when you find your son has deceived you!? Really? I suppose she was responding in relief that the money had been found. Maybe James had this lady in mind when he talked about “the double-minded man who is unstable in all his ways” and “out of the same mouth come blessings and curses” (James 1:8; 3:10)

Now if that’s not strange enough, Micah’s mom says she’d had plans for the money: “I had dedicated the silver to the Lord for my son to make idols.” This Israelite woman is just a little mixed up, confused, deceived, double-minded, guilty of syncretism.

A confused mom yields a confused son. Micah sets up idols in his own house and then makes his own son his priest—until a Levite man comes along and consents to be his own private priest. Micah then claims, “Now I know that the Lord will favor me, since I have a Levite to be my priest.”  (By Mosaic Law, only Levites were supposed to be priests.) What a mixture of beliefs: Seeking God’s favor through disobedience to His commands!

Later, the Danite tribe, en route to conquer some new territory, discover Micah’s stash:  a carved image, an ephod, a teraphim, and a molten image. They persuade the Levite priest to join them instead—which he’s glad to do.

Here’s another mixed-up character. The priest’s place of service should have been solely at the tabernacle at Shiloh.  He’s supposed to represent and worship the one true God, but in actuality he’s only lord over sticks and stones. And when given the opportunity, he gladly follows greed.

Note: Beware the lone wolf, the one without accountability. “In those days there was no king in Israel and everyone did what was right in his own eyes” (Judges 21:25).

Are there “servants of God” like this today? Yes, I think so. I was accosted by two Mormons yesterday—fully convinced they had the full truth. Just by reading the book of Mormon, they said, they had received blessings from God ten-fold. And wouldn’t I like to experience it too? And Jesus Christ figured prominently into their sentences. Mixed up? Joseph Smith vs. Jesus Christ. Hmmm.

As for the Danites, they set up those idols for themselves, led by  . . . guess who? Moses’ grandson Jonathan of all people! Can that be possible? A grandfather’s godliness does not guarantee piety for his children or grandchildren. We all have choices in life. Even with a most godly example, we can choose to follow a path of rebellion. Jon knew all the stories by heart, I’m sure. He’d heard them rehearsed around the dinner table, recounted, and reiterated. He knew the 10 Rules that his grandpa carried down Mt Sinai. How could he, dare he, fall so far from God’s path to follow after the enemy’s path?

Now you know why I pray daily for my grandchildren.

One thought on “Syncretism”